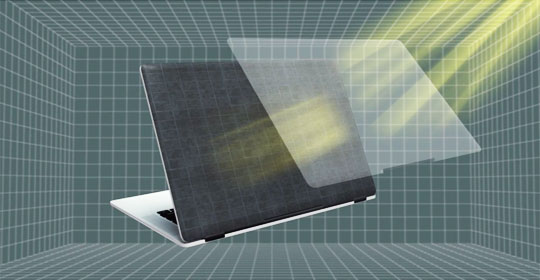 First time I seen a solar powered device was a small calculator back in 1989 in Yugoslavia and I have always wondered why there were not more devices using solar energy. So to hear that Apple is patenting solar powered laptops comes at no surprise rather the surprise is that it took them this long. Expect your next MacBook to be solar!
Apple has been granted a patent for a dual-sided laptop display that can be powered by solar panels housed within the back of the lid.
According to reports, the new laptop would house an LED, or Retina display in the front of the lid, like any other MacBook, but at the same time would house photovoltaic cells, on the back of the lid. These panels will sit under electrochromic glass, or smart glass, which controls how much light goes through.

Apple is also thinking of having touch sensors located on the back of the laptop display, to perform functions such as locking/unlocking the tablet or media playback without having to flip the device open.

Apple says the new system could also be implemented on tablets, mobile phones, and other handful devices, as well as things like monitors and televisions.

It is unknown when these innovations may come to be, but according to reports this is not the first time Apple has patented solar powered designs for its tablets.