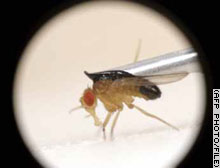 Scientists at the University of the West of England have designed a robot that does not require batteries or electricity to power itself but instead, it generates energy by catching and eating houseflies. More after the jump…”Dr Chris Melhuish and his Bristol-based team hope the robot, called EcoBot II, will one day be sent into zones too dangerous for humans, potentially proving invaluable in military, security and industrial areas. (…) The EcoBot II powers itself in much the same way as animals feed themselves to get their energy, he said. At this stage, EcoBot II is a “proof-of-concept” robot and travels only at roughly 10 centimeters per hour. (…) The EcoBot II uses human sewage as bait to catch the insects. It then digests the flies, before their exoskeletons are turned into electricity, which enables the robot to function.”