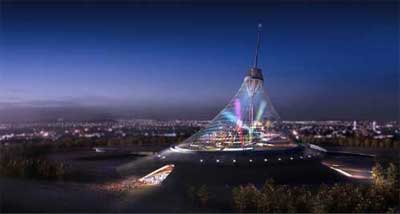 As strange as it may sound, BBC reports that Kazakhstan’s capital, Astana is getting a “500-foot high tent built over the entire city to keep it warm in the winter. The completion of the dome is expected in 12 months. “It’ll be made from a special material that absorbs sunlight to give the effect of summer year-round, allowing lucky Kazaks to play tennis and go swimming while the rest of Eastern Europe is stuck bundling up and trudging through snow. This isn’t just a pipe dream, either; UK architect Norman Foster plans to have the project completed in about a year”Is this some kind of a joke?