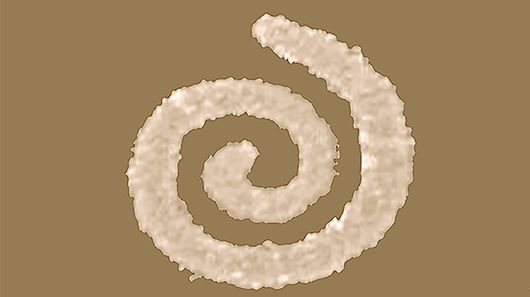 Researchers from Vanderbilt University in Nashville, Tennessee have created the world’s smallest continuous spirals. Made from gold, the spirals exhibit a set of very specific optical properties that would be difficult to fake, making them ideal for use in identity cards or other items where authenticity is paramount.

It’s not the first time that microscopic spirals have been studied by researchers, but previous efforts have focused on spirals made from individual nanoparticles rather than solid bars, like drawing in dots of ink rather than full lines. The nano-spirals in the new study are also much smaller than those in prior research, with a square array featuring some 100 nano spirals measuring less than one hundredth of a millimeter wide.

Once fabrication was complete, the team began testing the optical properties of the spirals. Each individual spiral is smaller than the wavelength of visible light, affording it some interesting and difficult-to-fake properties.

When the researchers shone an infrared laser on them, an effect known as frequency doubling or harmonic generation occurred, causing a visible blue light to be emitted. Essentially, as the light hits the spirals, it’s absorbed by electrons in structure, and forced along the arms of spiral. So much energy is absorbed during the process that blue light is emitted at the center of the spiral, with double the frequency of the incoming infrared light. 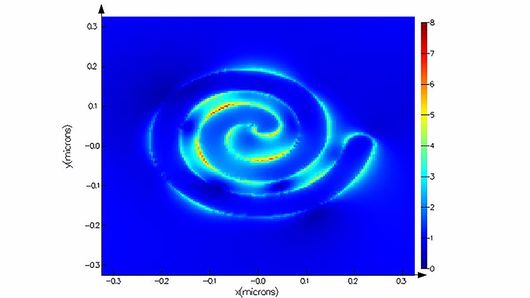 Previous to the research, the strongest known frequency doubler was a synthetic crystal called beta barium borate. The spirals fabricated in the new study are much more effective at throwing out the high-frequency light than the crystal, producing four times as much blue light during testing.

The researchers also found that the spirals exhibited a very distinctive response to polarized light, which is light that vibrates in a single plane. The amount of emitted blue light varies depending on the angle of the polarized beam – something that scientists could measure and use as a stamp of material authenticity.

Overall, the nano-spirals’ unique response to infrared light would make them a good fit for use on identification or credit cards. The spiral arrays would be too small to see with the naked eye, but could be detected by a device akin to a barcode reader.

The team has already experimented with placing small arrays of nano-spirals on a glass substrate, but it would also be possible to fabricate them on other materials such as plastic or paper. The spirals themselves could also be constructed from different materials including silver and platinum. Given the small amount of metal involved, the costs of using such precious materials would actually be very low.

The researchers published the findings of the study in the Journal of Nanophotonics.