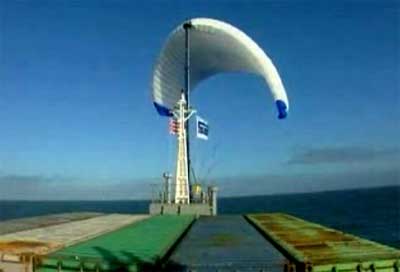 The world’s first cargo ship partially powered by a giant kite on its maiden voyage from Germany to Venezuela. “Beluga SkySails” is fitted with a giant computer-guided kite, which helps the engines to power the ship – thereby reducing fuel consumption and emissions by 20 percent. The ship is the result of co-operation between two German companies, who hope this first journey is just the start of a comeback for harnessing windpower in the fight against climate change. VIDEO->