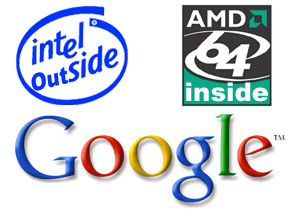 Search engine giant Google will be switching its internal servers from microprocessors made by Intel to chips from rival AMD, Wire Reports. It could be a boom for AMD, which has struggled to get a significant foothold in the corporate market. Google has more than 200,000 internal servers worldwide. The search engine company has started to buy AMD’s 64-bit Opteron processors for almost all new purchases, according to the reports.