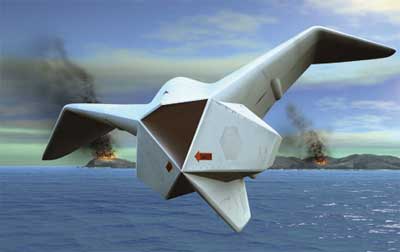 Lockhead Martin, inventors of U-2 and Blackbird spy planes that flew higher than anything else in the world in their day have come up with a cool concept. An airplane that starts and ends its mission 150 feet underwater. It is launched from a submarine and the Stealthy drone quietly floats to the surface and goes to kill all the ones who hate the world, and then slips back under the waves to be retrieved by a sneaky robotic underwater vehicle ( which is piloted by James Bond ). Testing should be done by September, when the Defense Advanced Research Projects Agency (DARPA) will decide if it will commission a flying prototype. So it’s not real yet but its the coolest looking jet I have ever seen.